After five weeks of travel by the time I got to Thailand I was pretty worn out. Having a 600+ km trip the morning after I arrived wasn’t an auspicious start, but things got better after that with a fairly light mission schedule.

By the time the weekend arrived I was feeling pretty shattered so rather than go to church on Saturday I had a long rest at the hotel and spent the afternoon reading and having a swim.

When in Bangkok I stay at the Conrad Hotel which is my absolutely favourite hotel. It isn’t the fanciest, but in terms of comfort and well trained staff it is second to none. It probably sounds crazy but I actually feel quite pleased at the prospect of staying at the Conrad. It is about the only hotel where I’ve never had a problem with. The fact that I enjoy being in Thailand also probably helps.

The Conrad has a very nice pool which was well patronized. There were quite a few people here escaping winter. When swimming I do a combination of swim ‘drills’ as well as actual swimming. The former are to focus/practice technique and this is the most important part of the training; swimming is all about technique. I use the ‘Total Immersion’ technique which is aimed at triathletes. During a break in my swimming an American came over and asked if I did triathlons. He had seen me drilling and said to his wife that only a triathlete would do something like that.

Dave was a doctor, and triathlete, visiting from Seattle. He as a most interesting fellow and was not only my age, but also did Olympic distance triathlons in the same time as I do. We both lamented being in the 40-50 age group which is so competitive. He recognized my swimming as influenced by Terry Laughlin (founder of Total Immersion), although he didn’t use it. It seems that Terry’s followers are mainly people like me who enjoy running and cycling and only swim because we have to. Dave was fascinated by the World Bank, having lived through the anti-globalization riots in Seattle a few years ago, and spent a lot of time pumping me for information. In the end I told him to read the book ‘The World’s Banker’ about Jim Wolfensohn, the former president. It explains the Bank’s activities far better than any of us who work for it can.

In the evening I decided to try a new restaurant – I’ve been to Bangkok so often that it is easy just to patronise my regular favourites. I picked up one of these restaurant guides and they mentioned a vegetarian cafe called the Tamarind Cafe, located at Sukhumvit Soi 20. With an excellent write up I thought it worth trying. I was not to be disappointed.

It is run by two women: one from France and the other from Taiwan. There was a great deal of variety with the food choice, everything from Asian to European. It also had avery nice ambience to the place as the restaurant doubled as an art gallery so the walls were bedecked with excellent photographs and paintings.

A woman at the table next to me invited me to join her for dinner. Christine was Spanish/English and living in Bangkok teaching at an English Kindergarten. It was interesting hearing what life is like to live in Bangkok today, as we last lived here in the early 90’s, although I’ve been back many times. One major change is the number of English language schools. Whereas before they were restricted, indeed, even ones in operation could not have more than a token number of Thai students, the market has been opened and there are now many of them in operation.

Christine couldn’t believe it when I told her how, in 1989 when we first moved here, the government discouraged learning English in the schools and to find a taxi driver who understood a single word was a rarity. Digression. In Bangkok you will still find old 1 star hotels with names like 627. These date back to the Vietnam war when Bangkok was a Rest & Recreation stop for the US troops. They would come here and write the hotel ‘name’ on their hand before going out for a drunken binge. Showing the hand to a taxi driver helped ensure they made it home.

Thailand has always had a love/hate relationship with its more sordid side. There are places like Patpong or Soi Cowboy which are rife with bars and strip joints where anything goes, however, at the same time there is a strong moralistic view among some Thais who don’t like the image they portray. During my visit there was a lot of discussion about the banning of the book ‘Bangkok Inside Out’ which was a no holds tourist guide to the delights of Bangkok. The Government said that the book “discusses negative subjects such as fake goods, gambling, gay performances, touts and scams, and places such as Patpong, Nana, and Khaosan Road,”. They singled out a photograph that shows a bar girl on a foreigner’s lap as particularly offensive. According to the Constitution, the press has freedom to publish so what they have done is to ensure that book stores aren’t allowed to sell the books. Visits by Thai police to book stores have ensured that this decision is enforced.

While I was in Bangkok Thailand’s Prime Minister Thaksin Shinawatra sold his family’s shares in his telecommuncations empire to the Singapore Government’s investment arm for about US$ 2 billion. This has not gone down well with many people, especially as the sale is tax free. There have been calls for an enquiry and a huge protest was planned for the day after I left Bangkok. The situation is so tense that the foreign embassies have requested foreigners to stay away from the area of the protest in case a repetition of 1992 occurs. That is when hundreds of demonstrators were killed by the army as they protested the elevation of a general to be Prime Minister.

I used my ‘spare’ time in Bangkok to finish off a report I was preparing on using Google Earth to manage spatial data for Bank projects. It has been an interesting assignment and I was able to do quite a few field tests during my visits in China and Thailand. It’s a good thing I got it done as on the first day I’m back in the USA I am doing a presentation to the Bank on it.

On Monday I had another field visit, this time to look at a couple of overpasses the 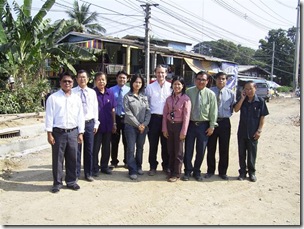 Bank is financing. This meant another long day of driving for a short time on site, but the visit was worthwhile as there were some quality issues (again) at one site, while the other site the work was of good quality. Just confirms the importance of getting good contractors and good supervision.

The rest of my time was spent in meetings on various issues. It was a useful visit as I was able to tie up quite a few loose ends and give some general advice to put them on the right course. It is just disconcerting how long it can take to get things under way in Thailand. We are looking at opportunities for future work here as part of the Government’s ‘Mega Projects’ program, and it would be great for the Bank to participate as I think we have a lot to offer.

Thursday evening I went back to the Tamarind and had dinner with an old church friend Peter Fretten. Peter has been here since I first arrived in the 1980’s. Originally Australian he is now effectively Thai with a Thai wife. Always good to see Peter and find out the news about what’s happening with mutual friends etc. He is one of the few left here from our time back then; all have moved on and many we have lost touch with.

Since I was leaving on the 06:40 flight I decided to skip sleeping Thursday and begin the process of resetting my body clock to N. America (-12 h). I went for a run at 03:00 (the Conrad is one of the few hotels with a 24 h gym) and not surprisingly, I was the only one there. My ankle injury decided to act up so it was a disappointing run, but at least I got in 30 mins. Pity that the pool was closed as it would have been nice to cool off afterwards. I checked out at 4:30 and was at the airport by 05:00.

It was an uneventful, but long, flight back. Flew to Tokyo where I had a 3 h wait before flying on to Chicago. Then Chicago to Toronto. I got to my parents apartment at 20:00 so it was about 28.5 h of travel from the time I left the hotel. At least I managed 8 h sleep on the flight from Tokyo which made it a bit more bearable.

I have two days here and then Sunday evening I’ll be home in D.C. Lis arrives Monday p.m. which is great. I’ll enjoy my time there, at least for the 3.5 weeks until I’m off again to China! The joy of life at the Bank … constant travel. At least for now.